Providing you with Religious Supplies Since 1933 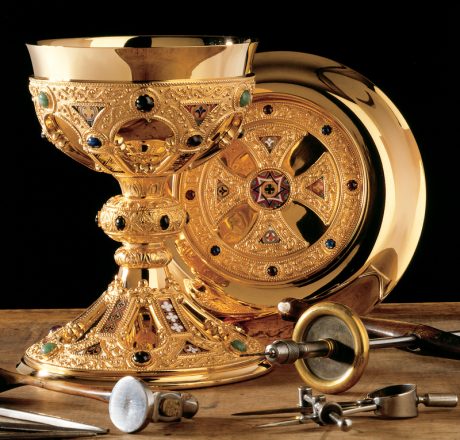 The St. Remy Chalice and Paten from Artistic Silver

This masterpiece is an accurate replica of the original twelfth century St. Remy Chalice, housed in
the Cathedral of Reims (France). It is completely hand made in 925 sterling silver gold plate.
Attractive hand chased outer cup and base with open arch design exposing the brightly polished
inner cup and base. Set with 32 genuine stones (Amethysts, Lapis Lazulis, Green Venturines and Garnets)
as well as adorned with cloisonne fire enamel, the St. Remy chalice is a superb blend of beauty,
quality and dignity of design.
Size is 7-3/8″H., Cup diameter 5-1/4″, Capacity 18 ounces, Paten 7″ diameter.

Please enter your church name and address in the special instructions section of our shopping cart.

We will need a duty free form signed which we will fax or scan to you.

Widely known as the “St. Remy”, the chalice of St. Remigius is probably the most beautiful and treasured symbol of a Christian sacred vessel. Its sheer beauty, magnificent craftmanship and interesting history make it a legend in its own right. St. Remigius, Apostle of the Franks and Archbishop of Reims, France, during the VI Century was a very influential man who converted the Franks to Christianity. The Franks had been mainly warriors until then and had robbed or destroyed many of the sacred vessels of the Churches of the era. It is said that, after the Franks converted to Christianity, the chalice of St. Remigius was cut from the gold of the celebrated vase of the Church of Soissons, previously damaged by a soldier of Clovis, King of the Franks, as a gesture of regret. The St. Remy chalice has been preciously kept since then in the treasure of the Cathedral of Reims, being even used by the Kings of France to communicate under the species of wine at the end of the Coronation ceremonies. Our version of this mighty chalice is a living proof of the degree of expertise, pefection and attention to detail transmitted through generations of our craftsmen. Every part, every bit of it is made by hand with the purest techniques used by the great medieval silversmiths mixed with the most modern plating methods to assure that every one of them is a worthy tribute to the original chalice and a piece of art that will further its value with the passing of time. 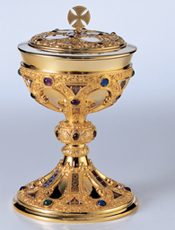 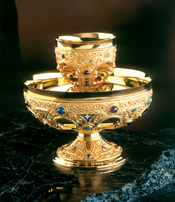